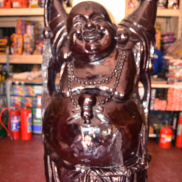 My initial excitement over the Chinese-Johannesburg in-depth project came to an end after I realised my initial feature idea would require six months to  realise.

I wanted to examine the culture of doing business within the Chinese-Johannesburg community and my multi-media would chronicle a Chinese owned tattoo parlour.

This proved problematic on two fronts: there were no Chinese owned tattoo parlours in the greater Johannesburg area (none that I could track down) and  most business owners in the Chinese-Johannesburg community weren’t interested in talking trade secrets with students. This forced me to re-think my strategy.

A tour of old Chinatown on Commissioner street in Johannesburg and Cyrildene helped me slightly focus my new art theme. In one day, we saw Chinese-inspired architecture in Cyrildene. Most buildings were written in Chinese calligraphy which in itself is a form of art. I found out there were four main different types of calligraphy. We also saw an old terragame structure and terragame pigeons. We also saw a Chinese dragon sculpture where old Chinatown used to be.